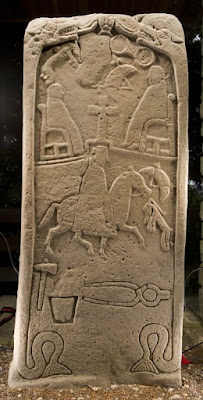 The Dunfallandy Pictish stone www.canmore.org.uk Just outside of Pitlochry at a place called Dunfallandy, there is a Class II Pictish stone. This is probably one of my favourite Pictish stones. The stone dates to around the 8th/9th centuries. It’s located on a small hill or mound on the west bank of the River Tummel. The mound overlooks some fields towards the west. The stone has been placed in a small shelter to protect it from the weather. On one side of the stone, there’s an ornately carved Christian cross. There are animals, beasts and angels on either side of the cross. On the other side, there are three figures. There are two figures sitting on thrones, probably a man and a woman. Below, there’s a figure on horseback. They’re probably clergy or royalty, or both. Many monks and nuns were actually princes and princesses, who chose the religious life. The Dunfallandy Pictish stone was known as Clach an t-Sagairt, the Priest’s stone in Gaelic. Dunfallandy is located in an area called
Post a Comment
Read more

- April 21, 2022
In the Anglo-Saxon chronicles, there is an entry for the year 508AD which refers to a British king called Natanleod who is killed by King Cerdic of Wessex with 5,000 of his men at a place called Netley Marsh. According to the Anglo-Saxon chronicles,  “This year Cerdic and Cynric slew a British king, whose name was Natanleod, and five thousand men with him. After this was the land named Netley, from him, as far as Charford.” Netley Marsh is in Hampshire on the south coast of England. King Cerdic supposedly landed on the south coast with his son Cynric in 495AD with ship loads of Anglo-Saxon warriors. When the Romans withdrew from Britannia in 410AD, the Anglo-Saxons, Scots and Picts raided Britannia. A king of the Britons called Vortigern supposedly recruits the Anglo-Saxons as mercenaries to fight the Scots and Picts. After defeating the Scots and Picts, the Anglo-Saxons turn on Vortigern and the Britons. Ambrosius Aurelianus, a Roman Briton rallies the Britons and defeats the Anglo-Sa
Post a Comment
Read more

The geographic distribution of the Pictish symbol stones 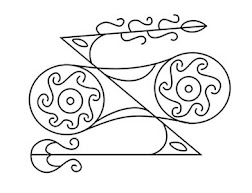 In order to better understand the potential meaning of the Pictish symbols, we need to study the location and context of the Pictish stones. I’ve attempted to map out the earlier Class I Pictish stones according to each of the symbols. This should help us understand if we can allocate the symbols to regions or geographical areas. As such, we may be able to identify the symbols with tribes, tribal confederations or kingdoms. I’ve included the main abstract symbols as well as some of the animal symbols. Double disc and Z rod The double disc and Z rod is one of the main Pictish symbols. It’s clearly a symbol of power and authority. There are many theories as to what the double disc and Z rod represents. It may be two shields with a lightning bolt or a spear. It may be two wheels of a chariot or two celestial bodies, such as the sun and the moon. It may be a symbol of Pictish kingship, a tribal confederation or a Pictish god of thunder. The Z rod suggests that it may have something to do w
Post a Comment
Read more

The location of the battle of Mons Graupius 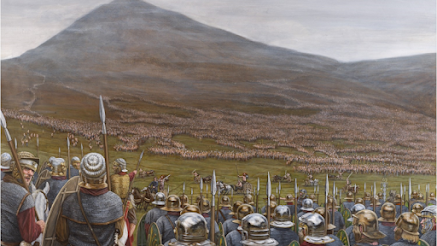 Around 80AD, the governor of the Roman province of Britannia, Agricola, attempted to conquer Caledonia. After subjugating the Celtic tribes of Wales and the Brigantes and other tribes to the north of Britannia, he turned his attention to Caledonia. The Caledonian tribes were based north of the Forth and the Clyde. The Roman historian Tacitus, who was the son in law of Agricola, provided an account of Agricola's campaigns in Caledonia. According to Tacitus, the Romans and Caledonians fought a major battle at a place called Mons Graupius. The battle was a decisive victory for the Romans. The Romans lost around 350 men and the Caledonians lost around 10,000 men. However, Tacitus may have greatly exaggerated the number of casualties.  By the third year, Agricola had conquered the tribes as far north as the Firth of Tay. He also built forts at places like Ardoch, Strageath and Bertha. In the fourth year, he built forts between the Forth and the Clyde along the Antonine line. In the fift
Post a Comment
Read more

A few months ago, I published a book about King Arthur called 'Arthur, Prince of Mar'. I argued that King Arthur was a king of the Picts who fought alongside the native Britons against the Anglo-Saxons in the 5th century AD. I had good reason to believe that this was the case. In an old Welsh genealogy called the Descent of the Men of the North, there is a famous king called Arthwys son of Mar who lived during the 5th century. I identified Mar as the province of Mar in Aberdeenshire. Furthermore, the French monk, Lambert of St Omer explained in the early 12th century that King Arthur was a ‘Dux Pictorum’, a leader of the Picts. Any Arthurian enthusiast will be familiar with the term ‘Dux Bellorum’, which means leader of battles. A Welsh monk called Nennius explained in the 9th century that King Arthur was a Dux Bellorum who fought 12 battles against the Anglo-Saxons in his famous work, Historia Brittonum. The Picts were the native tribes of Scotland who united with the Gaels in
Post a Comment
Read more

The location of the battle of Dunnichen 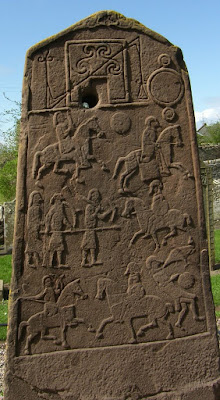 The Pictish stone at Aberlemno. In 685AD, the Picts, led by King Bridei Mac Beli defeated an army of Northumbrian Angles at the battle of Dunnichen. The Northumbrian king, Ecgfrith, was killed in the battle. The battle of Dunnichen secured the independence of Pictland for the next 200 years or so and paved the way for the kingdom of Alba. The battle was recorded in a number of sources including Bede's history of the English people, Nennius' Historia Brittonum, the Anglo-Saxon chronicles and the Irish annals. According to Bede, "The very next year (685AD), that same king (Ecgfrith), rashly leading his army to ravage the province of the Picts, much against the advice of his friends, and particularly of Cuthbert, of blessed memory, who had been lately ordained his bishop, the enemy made show as if they fled, and the king was drawn into the straits of inaccessible mountains, and slain with the greatest part of his forces, on the 20th of May, in the fortieth year of his age, an
Post a Comment
Read more

In 843AD, Kenneth Mac Alpin united Dalriada and Pictland, establishing the kingdom of Alba. Kenneth Mac Alpin was a king of Dalriada who claimed the Pictish kingship through his mother, who was a Pictish princess. However, there is very little information as to how this actually took place. It was a chaotic time in the history of Alba and Scotland. The Vikings were raiding Dalriada and Pictland. In 839AD, there was a famous battle where the Gaels and the Picts were defeated by the Vikings. A Pictish king and his brother and a king of Dalriada were killed in the battle. According to the Annals of Ulster, “The heathens won a battle against the men of Fortriu, and Eóganán son of Aengus, Bran son of Óengus, Aed son of Boanta, and others almost innumerable fell there.” This led to a vacuum of power in Pictland. The Pictish king, Uurad, succeeded Eoganan and ruled for 3 years. He was followed by his son, Bridei, who ruled for only one year. Bridei was followed by 3 other kings who all ru
Post a Comment
Read more
More posts